Why You Want an AR-12 for Home Defense

If you’ve decided you want a shotgun for your home defense weapon of choice, there are some compelling reasons for choosing an AR-12. Or maybe you’re having a hard time choosing between a shotgun and a rifle. Then the AR-12 might just be the firearm you need, because the AR-12 is, in many ways, a 12 gauge shotgun in a rifle disguise. 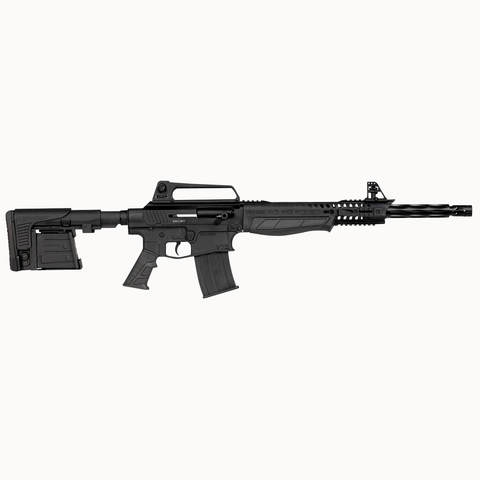 AR-12s are gas-powered semi-automatic shotguns (semi auto shotguns), and they look and function in many ways like the AR-15 rifle, except they shoot shotgun shells. The magazine release and the manual safety are positioned to match the AR-15 (and the military’s M16, more on that later).

From even a short distance, an AR-12 shotgun will pass as an AR-15 rifle. It’s a niche product category that some firearms purists look down on, but it has proved to be popular nonetheless. AR-12s have been promoted as a multipurpose weapon, good for home defense, hunting, sporting and tactical purposes.

First, let’s take a look at some practical reasons you would choose an AR-12 over another shotgun. There are some important features and functions you get with an AR-12 that you don’t get with most other shotguns.

But before that, it’s important you know that not all AR-12s are equal. Not every manufacturer’s AR-12 model is a quality gun, but there are several options you can consider with confidence.

AR-12s are generally affordable, with several quality models available for under $500. These guns are relatively lightweight, most under 9 pounds, and some models, such as the Panzer Arms AR-12 Tactical, under 7 pounds (when unloaded). AR-12s have an ergonomically considered, pistol-style grip.

Probably the most important feature of the AR-12 that differentiates it from other shotguns is its capacity. Most AR-12s easily accept ten-shot magazines, and some can accommodate magazines of 20 shots.

AR-12s are generally larger than most other shotguns, if not longer then certainly less streamlined and a little more cumbersome. Once its owner becomes accustomed to the weight distribution of the AR-12, most find it as maneuverable as a traditional shotgun.

But most people who buy AR-12s don’t do it for practical reasons, they buy the AR-12 for esthetic reasons. They buy AR-12s because it’s a shotgun that looks like an AR-15. They like them because they look intimidating. At this point it helps to consider the history of the AR-15 and why Americans have such a strong attachment to that rifle. The story of the AR-15 begins with the AR-10, designed in the late 1950s by Eugene Stoner for a new, small company called ArmaLite.

While the AR-10 did not win approval by the U.S. military, it was adopted by a number of small countries, including Guatemala and Burma. After ArmaLite licensed the AR-10 design, and its next generation, the smaller, lighter AR-15, to Colt in 1959, with a few modifications from Colt, the U.S. military adopted the modified AR-15 as the M16. The M16 went into use in 1962 and became the standard U.S. military service rifle in 1969.

Colt marketed the almost-identical AR-15 to the civilian market, which meant the AR-15 played stand-in for the M16 in hundreds of war and crime movies and television series produced over the next 25 years, and it became the most familiar of all rifles in the American consciousness. 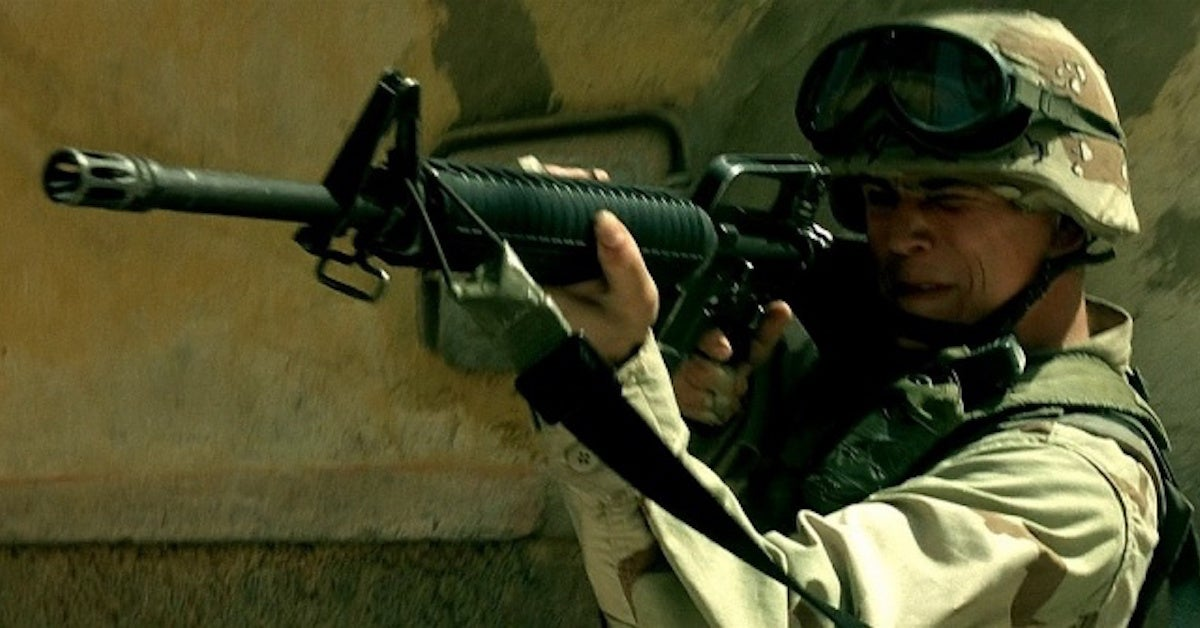 M16 in Black Hawk Down

Even though the M4 started pushing the M16 out of the U.S. military in the 1990s, the AR-style rifle maintained its primacy as the traditional bad-ass rifle in American pop culture. Among the AR-15’s many film roles that cemented its American celebrity are those in “The Green Berets,” “Ice Station Zebra,” “Scarface,” “Full Metal Jacket,” “Heat,” “Black Hawk Down,” “The Hurt Locker” and “Zero Dark Thirty.”

This mid-priced Turkish shotgun is the most recent tweak of the longstanding design. And while many in the U.S. market have been justifiably skeptical with some Turkish products, Panzer Arms has earned a reputation for quality. With a 20-inch barrel, this Panzer shotgun’s overall length is under 41 inches. It handles very similarly to most AR-style rifles, and it’s easy to load and unload. The B100 is an AR-style bullpup 12-gauge, so its polymer stock is directly behind the action, making the B100 as compact as possible without sacrificing firepower. It has a removable angled forward grip and flip-up sights, and mounting optics or accessories is easy. In addition to black, this shotgun comes in desert tan, silver and even red.

The Boss 25’s chrome-lined barrel (with a factory-installed muzzle break) is 18.75 inches long, and with its overall length of barely over three feet (37.75 inches) it’s one of the shortest of the AR-style shotguns. It still clocks in at 8 pounds.

The majority of AR-12 style shotguns list for well over $500, but this Turkish model is the best quality of the handful of models that list for under $400. The Typhoon X12 has a big following in Europe, particularly in the United Kingdom, perhaps because of the nice showing the upper-end Typhoon F12s did at the World Shotgun Championships. 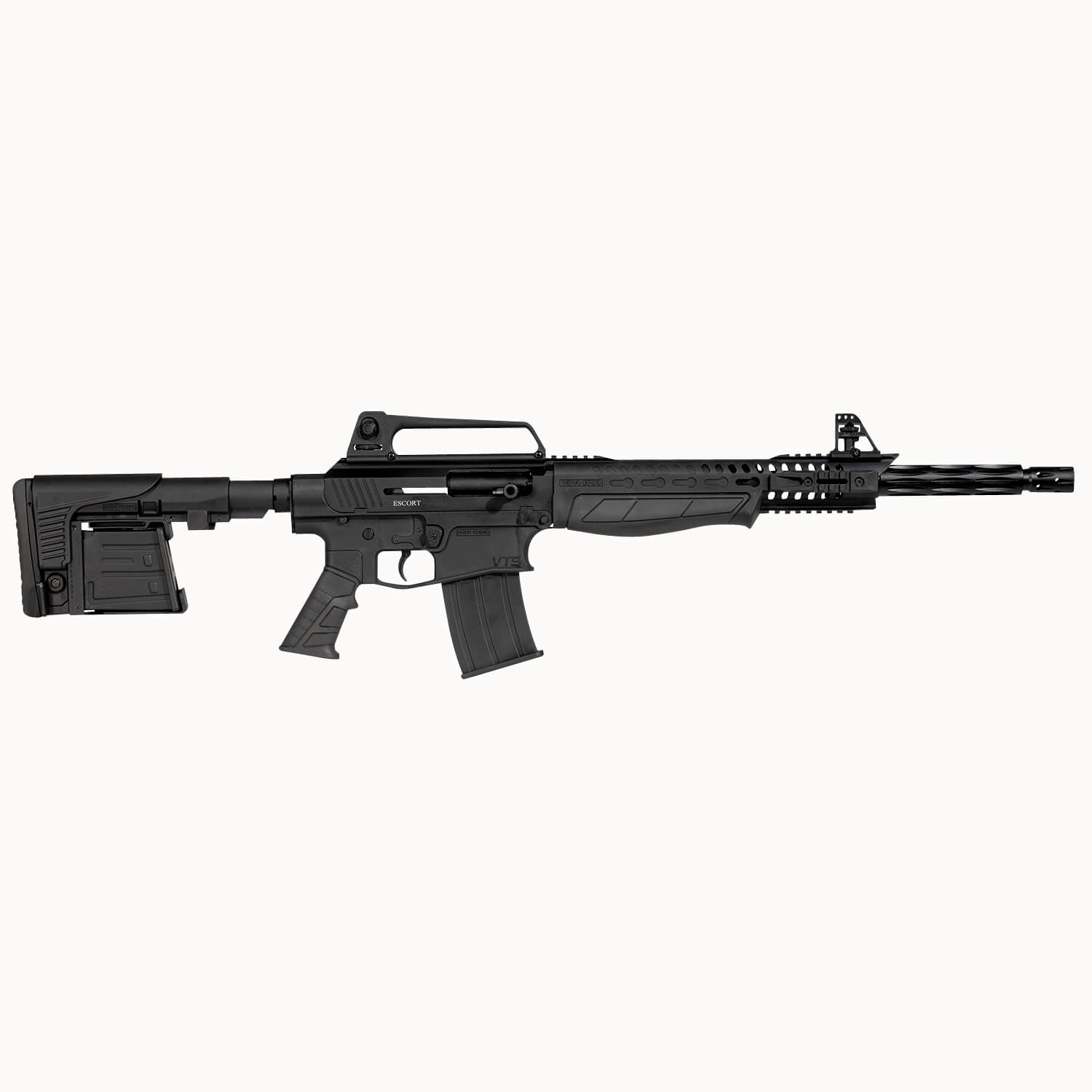 This is a modern sporting AR 12 shotgun. It is chambered in 12 gauge and gas operated. The Chrome plated steel barrel is 18 inches long and built to withstand harsh conditions. The ambidextrous controls make it easy to operate left or right handed. The stock comb is adjustable to make it fit any shooter.